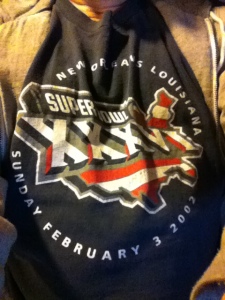 There’s no place I’d rather not be than in attendance at a Super Bowl. However, I have no qualms at all about being close enough to the big game to create and embellish any number of anecdotes to unsuspecting victims. This is one of them.

The 2002 National Automobile Dealers Association’s annual convention was held in New Orleans at the precise moment when the highest number of drunks would be in the Crescent City–the confluence of Mardis Gras and Super Bowl week. Being the national auto writer for the Associated Press at the time, I was assigned to cover the NADA for the next four days.

I love New Orleans, but one must admit, it operates in its own universe. For instance, after my cab navigated through the French Quarter and was almost upended by revelers, I was deposited at my hotel on Royal Street. I still had an unrelated story to finish to make the morning deadline and thought it would be good to call room service for a burger and beer. I wasn’t particular about the beer and just asked for a “Bud.” The young lady taking my order paused, and in an embarrassed voice, apologized they didn’t have “Bud” but did have something called “Bud-weiser.” She was sweet so I agreed to try that. Tasted quite similar to “Bud.”

After a couple of days my editors tired of stories about car dealers and told me to cut my trip short. With 5 hours to kill before leaving for my flight I decided to walk the mile or so up Poydras Street to the Super Dome where the Super Bowl would be played the following Sunday. I figured there would be some sort of souvenir shop where I could buy some overpriced tchockes with “Super Bowl” printed on it, allowing me to boast I had “been” there.

I did find a store in an office building that was attached to the stadium by a footbridge. I purchased a couple of the t-shirts, one of which is pictured here. The other stuff was either ridiculously expensive or just stupid. I could see no need to spend over 100 bucks on a leather cowboy hat with the Super Bowl and NFL logos on it, or night light, match book or any number of glass and plastic containers with the sole purpose of conveying beer into one’s gullet. A t-shirt always works and at 20 bucks each I was fine with it.

From there I attempted to get closer to the dome and perhaps be lucky enough to get inside to sneak a peek at the field. However, despite being 6 days before the actual game, the super silver spaceship of a stadium had more security than Vladimir Putin’s bare chest. Concrete barriers, armed police, fences, cameras, signs warning you to not even entertain thoughts of breaching the imaginary line between “Super” and a life sentence in Super Max.

I quickly surmised instead of being appalled at the pop-up warzone created to protect a football game from being invaded by an enemy force of ball deflaters, I would embrace the experience, take it all in and delude myself into believing I had, in some way, wormed my way into close proximity to the big game for the mere price of two t-shirts.
And so, each Super Sunday I wear my now threadbare souvenir of Super Bowl XXXVI and each Super Sunday, just as members of my Tribe are encouraged when reading the story of Passover each year, I tell this tale, embellish it, enlarge it, make up a few details and embrace it, and toast my brush with Super-ness…with a Bud, or Budweiser, whichever is available.