I love sitting in airports and watching people. Today I had a longer time than usual to sit near the bar on C concourse at Palm Beach International. Before my eyes a story developed that I 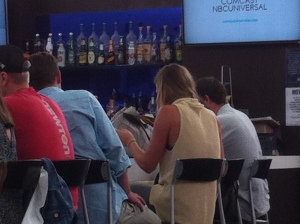 wish to convey to you in words and pictures. Keep in mind, I could not hear what was being said, so I let my imagination take over.

Let’s start with the attractive blonde woman who finds herself sitting between two eager lads in blue shirts. It’s apparent she doesn’t know them, but doesn’t mind allowing them to strike up a conversation with her.

Pretty soon, it’s apparent the guy on the right is making progress.

And before long, the guy on the left takes his backpack and beats it for his gate.

Ah….guy on the right is feeling like a stud and has the slackjawed grin and confident posture that goes with thinking you could actually make headway with such a beautiful girl.

But no sooner does this rube have his sights set on a steamy date with PBI’s hottest passenger, then a mystery suitor emerges who not only has her attention, but tosses the dude off his stool. He’s poised for some heavy petting. 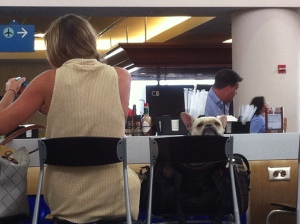