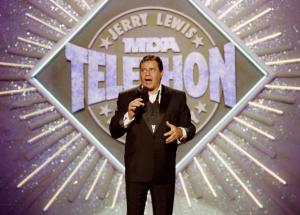 Of all the news stories that took me slightly aback in the last few days, it was the news that the Jerry Lewis Muscular Dystrophy Telethon was ending. Oh, it hadn’t really been a true telethon in years, with Lewis suddenly being banished in 2010 and the once 21-hour marathon broadcast eventually snipped down to a scant two hours. I honestly hadn’t watched in a very long time but still, the end of the line for the program that started when I was four years old triggers a fond memory of my personal involvement with the show, sort of.

During the telethon’s heyday in the 60’s Jerry Lewis asked kids to help his “kids,” those suffering from Muscular Dystrophy, by holding fundraising carnivals. My friends and I jumped right in and organized what we thought was a can’t miss selection of carnival games that we’d set up in the big grassy area of our immense apartment complex in Queens–Glen Oaks Village. Glen Oaks, which still exists, is so big it has its own zip code. Well, wouldn’t you know it, but some other kids from across the street got wind of our plan and decided to hold a competing carnival. The bastards! They were better funded than my group had a ringer who was a whiz at arts and crafts and they came up with fancy tickets and more elaborate games. To rub it in, they decided to hold their carnival on the same day, less than 100 yards, from ours! We were devastated. Our version of skeeball looked like pauper’s playthings compared to theirs. We made due with wiffle balls wrapped in duct tape while the fancy lads from across the street managed to wrangle actual skeeballs from a neighborhood arcade. It only got worse. Neighborhood kids lined up to play their games while we sat dejectedly at our booths lonely and defeated.

At the end of the day the bad guys raked in about 50 bucks and all we managed was a paltry 50 cents. My father felt sorry for us and chipped in a buck. We were ashamed to send in a check for $1.50 to Jerry Lewis but we had to do something with the money. So, in exchange for assorted pocket change and my father’s buck, my mother wrote out the $1.50 check and we sent it in and licked our wounds.

About a week later the mailman shoved an envelope through our mail slot with the return address: Jerry Lewis Telethon. It was a large envelope. Inside was a beautiful certificate with Jerry Lewis’s signature on it congratulating us on contributing to the fight against Muscular Dystrophy. Along with it was a short letter signed by Jerry thanking us for our efforts and making it clear every contribution made a difference. I know I have the certificate somewhere..I think.

The experience always stayed with me all these years and probably is the reason why I’ve continued to believe that if the cause is right, the effort is sincere and you tried your best, the size of one’s contribution isn’t what matters but the fact that you cared enough to give it a shot is appreciated. Besides, as the old joke goes…it couldn’t hurt!