It’s been a month since I left my laptop and iPhone on my desk, locked my office and walked out of Fiat Chrysler Automobiles for the last time and into retirement. Since then, among other things, I’ve thought about my other workplace exits and how some were better than others.

This one was probably the best. I had it planned for several months so it came as no surprise to my boss, who had treated me royally. My wonderful team tossed me a great lunch, presented me with a basket of bourbon, signed each bottle, and produced several videos that absolutely blew me away ranging from heartfelt expressions of farewell, goodbye, thanks and hilarious wiseass comments–to a collection of outtakes from my standups that exposed me as more than fallible, and they even created a spoof of my infamous “April in the D” song with the words changed to “All Because of E.” It was very hard to keep it together viewing those videos knowing that short of an occasional lunch or drinks, after 11 years I wouldn’t be seeing my second family every day. 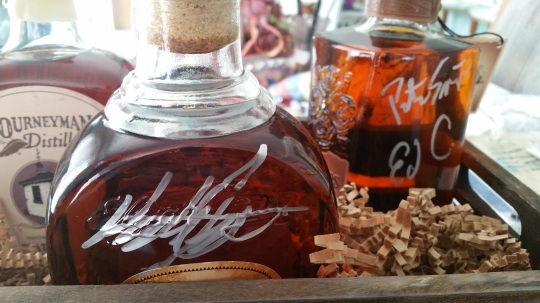 By the time my last day, July 29th, rolled around, I was spent from all the “goodbyes” and actually slipped out of the office with barely a word, swiped my badge for the last time, got in my car and called my wife, telling her “retirement as begun!”

But not every one of my employment exits was quite as, let’s say, smooth. There was the disastrous merger between Time Warner and AOL when I worked at CNN. We knew there would be layoffs but while I was at the Detroit Auto Show my boss took the time to page me (this was 2001) to let me know our bureau in Detroit would “not be touched.” Big relief! For 72 hours. A few days later I had returned from a shoot when my boss called me to let me know he was paying our bureau a visit the next day and that I should arrive and 9am and the rest of my staff should come an hour later. I was pretty obvious I was getting the boot. So I asked him what happened. “Oh,” changed our mind,” was his lame answer. I was pretty stunned and upset, then got it together spending the next few hour giving my staff the news, exchanging a few hugs, a few tears and then started gathering my stuff and put the past 20 years behind me. When the loser came in the next day to give me the official word and have me sign papers re my severance I asked again why the change of heart. He actually said, “now’s not the time.” Huh? Time had run out, and so did I.

When I left The Detroit News, it was to take the job that morphed into the one I held at FCA. The automaker was starting its first blog (2005) and the head of PR wanted an autowriter to manage and ghost write it for him. Cool job. I had been looking for work for a bit and six months prior had accepted a job at the rival Detroit Free Press but the News hated having their autowriters poached by the competition and gave me a huge raise to stay. So I did, but I still hated it there and kept looking. when the FCA job came through I jumped at it but never got a chance to give notice quite the way you should. While covering the annual auto industry conference in Traverse City, Mich., I called in a story we would be breaking, but I was flummoxed to find it wasn’t in the next day’s paper. That was the last straw for me after putting up with three years of what I thought was questionable and unethical editing decisions. What no one knew was that I had already sealed the deal on my new job so I had nothing to lose when I exploded in the media room at the conference, slamming down the phone and declaring, loud enough for all to hear, “screw it! I quit!” Of course it took only two breath’s time for that revelation to reach my boss back in Detroit who was not pleased to hear of my impending departure from a reporter at the Free Press. Oooops. They tossed me a goodbye thing anyway..maybe to make sure I was really leaving!

What I learned over the years is no matter what the circumstances of your departure from a job, always leave on the best terms possible. In all cases, except for the department store thing, I made sure I shook the boss’s hand, left a nice, positive goodbye note to my co-workers and removed any rotting deli from my desk drawers.