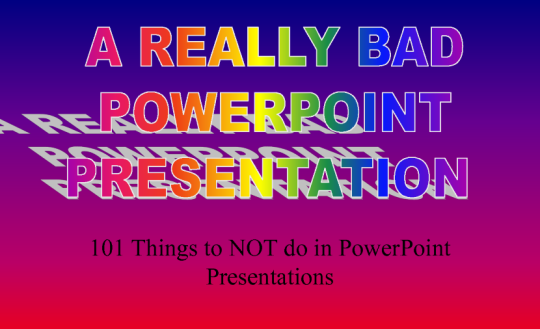 Could there be anything more mind-numbing than a long-winded speech or presentation punctuated with an endless Power Point deck where every slide contains every word the speaker just spoke? Oh, I use ’em, but try to make each slide a photo or some sort of graphic that supports what I’m saying, rather than parrot my patter. But sometimes fate steps in and has some mercy on your audience, pulling the plug on the Power Points…and then it’s time to tap dance.

It just happened to me this past Friday when I was presenting to a group of accounting students at a big conference here in Detroit. The subject was “communicating across the generations in the workplace.” The organizers sent me a template for my deck and I dutifully prepared some slides, most of which were silly photos. About 3 slides into my talk the computer died…and I couldn’t have been happier. Screw the slides! No longer tied to the cadence of the deck I could say anything I damned pleased in any order I wanted and the students seemed to relax, warming to the subject matter. I could use words and phrases and anecdotes to paint much better pictures than I could construct on Power Point. The only downside was they had nothing to look at but lil’ ol’ me. The computer was eventually repaired..it wasn’t plugged in..so I pushed the slides ahead but I really didn’t use them until the last one because it contained a funny photo that provided the punchline for the whole thing.

But by far, my most harrowing experience came in 2006 when I was asked by my company, DaimlerChrysler, at the time, to give a major talk about our social media initiatives. Oh..it was in Germany, at a Germany PR conference, in which me and a Dutch guy were the only ones presenting in English. The Dutch guy said he was presenting in English only as a courtesy to me, which I appreciated. I flew into Stuttgart on the company plane, which was nice, and later that day, drove the 90 minutes up the Autobahn to Wiesbaden, the site of the conference. I was already quite jet lagged, but the moderator of the conference, a short, mischievous, professor from Switzerland named Markus, insisted on taking us to a late dinner and cocktails until 3 a.m.  Too bad I had to get up at 6 a.m. for the conference.

Four hours into the conference I was half asleep and it was finally my turn. My presentation contained 62 slides. Things started well enough and then I heard a noise. The screen went up into the ceiling, the lights went out and the mic went dead. Markus, the bastard, smiled, looked at me and said, “if I was you, I’d keep talking.” Which I did, without benefit of slides, text or microphone, for 20 minutes. The audience seemed sympathetic and nodded a lot. Since the content of my talk included some very radical strategies, one German gentleman representing an automotive supplier piped up, “you are one  impertinent bastard! I wish I was you!” I got through the hour-long talk totally winging it and when I was done, received a nice round of applause even though many in the audience probably had no idea what I was saying. Maybe they were just glad I was done. I know I was, and honestly, quite grateful, my Power Points took a powder letting me just be me, and proving once and for all, when your slides take their leave, there’s no reason to hit the deck.