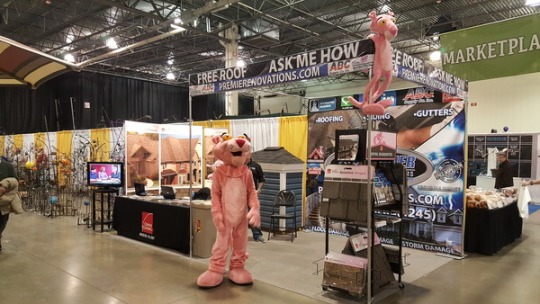 We went to the home show yesterday. I had two main goals in mind: find a carpenter and get a free yard stick. I actually own several yard sticks procured for free at previous home shows, and my favorite is one that’s actually slightly longer than a yard but shorter than a meter. It’s really just a long, flat stick with numbers on it, but I find it useful as a straight edge and as a tool for prying gum off my driveway, knocking things off high shelves, and wiggling between the legs of annoying door-to-door salesmen.

Home shows are really not shows, but rather aisles and aisles of booths staffed by friendly sales people who would like to sell you insulation, bricks, logs with which to fashion a cabin, ventilation systems and assorted methods of renovating your bathroom and kitchen. I generally have a project in mind and seek out specific vendors, while snarfing as many free Hershey Kisses as possible from the bowls at almost every booth. 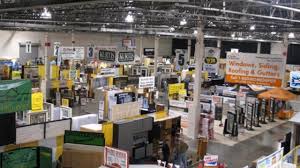 On this day, I really just needed to find a carpenter to repair the door frame on my garage. No dice. There were booths hawking remodeling, renovations, complete construction, but not one sign that said, “no job too small.” There’s a local home improvement company whose advertising slogan actually says, “no job too big, no job too small.” But when I called them several years ago and described my job, the guy on the phone was embarrassed to say to me, “I know, I know what our slogan says, but your job is actually too small.” 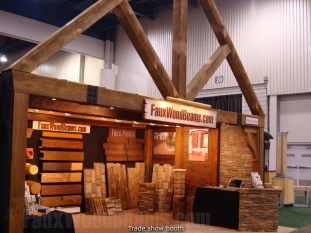 Having navigated past a half dozen or so Jacuzzi booths, home security stands and a few selling jerky and fudge, a woman came up to us handing us bags with packages of peanut butter crackers and a circular. We accepted them and dragged the little bags around till we got to the last aisle and past the stands selling “mystery sausage” and faux fake jewelry.

Frustrated at not finding someone willing to accept our modest job we decided to see what else was inside the bags of peanut butter crackers. Ha! A carpentry business! Somehow we had missed their actual booth, and no wonder. It was a guy sitting at a card table at the end of an aisle. I walked up to him and smiled. He smiled back. He said “hi young feller!” I thought, “he has no idea I got in on a senior ticket and I’m not telling.” I described my job to him and, well, he didn’t say “too small!” or “are you just busting my chops?” He handed me a business card  said they actually have one guy who does that kind of work and he usually starts those jobs in the spring.  A miracle! The power of peanut butter crackers!  Those are fine, but they give you bad breath and jeez, I really would have appreciated a yard stick. After all, who doesn’t abide by that old home show marketing slogan, “Give ‘em 36 inches, they’ll give you a smile?”