Like many people beaten to boredom by the endless Oscar ceremony, I went to bed early and missed the monumental screw up in announcing the wrong movie as best picture. So I’ve already wasted half my morning reading about it and watching the clips. It also got me thinking about mistakes I either made or affected me.

I have two brief examples, both of which occurred while I worked at CNN.  I was producing the morning show, then called “Daybreak,” back in the 1980’s. There had been a train wreck in Oregon. It wasn’t fatal, but it was a mess and there was fear hazardous fumes were leaking from some of the tanker cars.  It was a pretty slow news day so it led the hour. Our assignment desk jumped into action to get us someone on the phone they identified as both a witness and employee of the railroad. Remember that word “witness.” We were about to witness another disaster from the control room. During that era, CNN was still located in a former Jewish Country Club across the street from Georgia Tech. The newsroom was the old gym and it was a completely open floorplan. The writer and producer work stations, assignment desks, satellite desk, anchor set and control room were within a shout from each other…no walls. Someone from the assignment desk yells “got a phoner with a witness!” We quickly arrange to put the guy on the air and I tell the anchor, through her earpiece who she’ll be speaking with.

Anchor: “We have with us now on the phone (guy’s name)…a witness to the Oregon train wreck. Tell me sir. What does it look like from your vantage point? 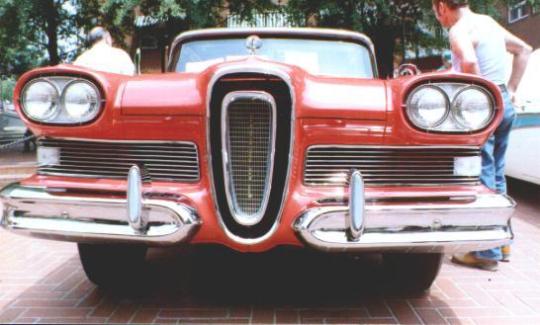 Then there was the time I was assigned a story on the 40th anniversary of the Ford Edsel. I must have missed a key note in the background material before interviewing the grandson of the failed car’s namesake.

Me: “How did you grandfather feel about the car being such a failure?”

Edsel Ford II.: “He didn’t really care. He died before the car was produced. Would you like to ask that question again…a different way?”

Which I did…after many apologies and my shooter confirming he had the whole thing on tape and would make “good use” of it.