President Trump’s curt cutting loose incumbent U.S. Attorneys reminds me of the times I’ve been on both sides of the equation, and how flawed the firing process can be.

First, getting fired but having the firing extinguished.

I was 16, working as a stockboy in the linens and domestics department at the long-ago bankrupt department store S. Klein on Long Island. It was a 20-hour a week after school gig where I stocked the shelves, folded sheets, curtains and table cloths and spelled the sales ladies when they went for their breaks. After my first manager was fired she was replaced by an insane guy named Sam. He had a habit of asking me to find oddball items that never sold and had them marked down to a nickel. He’d have me toss them all in a box and wheel it out to the sales floor on a dolly. Then Sam would stand up on the dolly and holler, “Shoppers! Cheap shit! Just a nickel!” Sam liked me.

So he was a bit put off when I showed up one day and told Sam the store manager let me go with the lame excuse they were “cutting back,” which was B.S. because I was the only linens and domestics stockboy. “Tell him to go screw (didn’t use that word) himself and then punch in and get to work!” Of course, I had been fired and my punch card was removed.  I went to the store manager to deliver Sam’s message. I improvised so as not to get tossed out by security and the confused store manager says, “I don’t remember firing you. You’re not fired. Get the hell to work…and punch in!”

The next time I was exposed to the firing process was the first time I had to let someone go. I was the program director at an upstate New York radio station and decided it was time to let go our evening announcer who not only sucked, he engaged in what I would call greasy kissing. You see he and his girlfriend would enjoy the greasiest, oiliest submarine sandwiches during his air shift, then they would lock their highly lubricated lips while the records played. He didn’t bother to wipe his hands which caused all the knobs and switches on the control board to be a gross, greasy mess and the studio to stink like a fermenting dumpster. The boy had to go.

This was my first firing so naturally I was nervous. I had it all planned. Had my “script” down pat. Was going to tell him his air product was not up to snuff and that was compounded by his disgusting eating habits and so the general manager and I agreed it was time to part ways. I followed this plan to the letter. Instead of him being upset or fighting for his job he responds, “so you’re cutting costs and need to trim the announcing staff. I understand completely and I appreciate the opportunity to work here.” Huh? Tell me I’m an asshole! Fight for your job! Instead, the guy masterfully makes up on the fly a totally false rationalization and walks out. Took us three days to clean the grease off the board and the smell of onions in the studio.

A few months later at the same station I got out the knife again. This time to fire the morning news guy. He had this idiotic habit of leading the news with the latest ski report. When I called him on it he argued “people wanna know the conditions!” This one was quick. “We’re letting you go based on your poor performance and lack of adequate news judgement.”  He just shook his head and muttered something with the word “asshole” in it as he left which I totally understood, under the circumstances.  Of course, this is long before I started skiing and now wish newscasts would lead with the latest conditions.

Late in the 1980’s at CNN, we managers were treated to a two-day seminar on how to fire people. Not how to save or rescue employees, but how to get them the hell out of the building without us being sued. The process involved the now discredited method called “progressive discipline.” This mainly consisted of telling someone they did something wrong and if they do it again something bad could happen. Then when they do it again you tell them something worse could happen. Third offense, you tell them the worst IS happening and they were out the door. You can see how this motivated employees to raise their performance by constantly worrying about the lowering boom rather than concentrating on the work at hand. 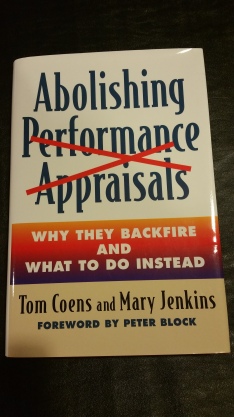 Several years later the authors of a book entitled “Abolishing Performance Appraisals” paid me a visit      to pitch a story on their book. I still have the book. Its premise is simple. Performance appraisals are for the most part bullshit and never contribute to improving an employee’s performance. Here’s how it works. An employee’s raise or bonus is often tied to the final score on his or her evaluation. Knowing this, the manager decides in advance how much money the employee should get and finagles the evaluation so the score matches the desired pay increase or bonus, or rigs it low enough to warrant canning their butt.

The best way of evaluating an employee is to keep track of their work on a daily basis. Something’s right? Give ‘em some praise. Not good enough? Take immediate corrective action. Have honest conversations several times during the year, not just during the specified evaluation period. You know what? If you’ve been honest enough all along, the inadequate employee will know they’re gone before you even tell them.

Then again, Henry Ford II didn’t waste a lot of time or thought when he decided to can Lee Iaccoca in 1978 telling him, “sometimes you just don’t like somebody.”