We arrived 20 minutes early and the smiling greeter handed my wife a pager with blue flashing lights and the promise that pager would go even more bonkers by flashing more urgently and vibrating once our turn came up.

We found comfortable seats in the waiting area and the aromas wafted over from the kitchen….of the cafeteria below…at what I’ll call the Behemoth Big Box Medical Fortress, where we would spend the next 7 hours, for a 30-minute repair job on my left knee..wrecked by years of playing ice hockey at an age when most men experience the game from Lazy Boys in front of a big screen TV, lubricated by potent legal elixirs.

The day started with an urgent call asking if I could arrive two hours earlier than planned due to a late cancellation. Sure. Let’s get it over with. The deal is you must arrive two hours before the surgery is scheduled so they can verify your insurance is inadequate to cover the costs of the procedure, strip you down, have you wrap yourself in a paper-thin gown, stab you with an IV, ask you the same questions a half-dozen times then let you rot in a prep room until they’re ready to do the deed.

Let’s start the clock. Arrival: 11:10am. Surgery scheduled for 1:30 p.m. Pager goes crazy and I’m taken into prep room at 11:30am. Told to strip naked, stuff everything in a too-small plastic satchel and put on the little gown that opens in the back. Two friendly nurses come in and inform me their husbands play hockey too and have wrecked their knees. I feel better already. The nurse on my right is the designated IV inserter and lets me know over and over that I will feel a “bee sting” when she pokes the needle into my vein. I’ve never been stung by a bee but I now know it would piss me off. But one bee sting wasn’t good. She didn’t like how things were flowing so she popped out the needle and gave me another bee sting in another vein. I now hope for the extinction of all bees.

My wife was then brought in to wait with me and was informed she would have full custody of the satchel with my stuff. Said satchel was not only bulky since it was jammed with my winter coat, clothes and sneakers, but it weighed slightly more than her. Bottom line: the bulky bag would go wherever she went. If she got tired of schlepping it, chances are I’d leave the hospital with my bare ass sticking out of the gown..my feet shod in only the mint green socks they provided, helpfully emblazoned with the hospital’s logo.

In the intervening hours various scrub-clad people popped into my room asking me what I ate, drank, snorted, sniffed or injected into my body, along with repeatedly quizzing me on what procedure I was there for. By the seventh time I was tempted to say I was there for treatment of two really bad bee stings.

My doctor finally deigned to drop in and used a Sharpie to put his initials on the knee that would be fixed. I had already done the same. This way they would be reasonably sure they didn’t fix the knee that didn’t need to be fixed.

All this time saline solution is being sent through my veins via the IV, causing the urge to   pee like a pack mule. This meant me gathering my IV lines, grabbing the pole that contained the bag of saline and wheeling it and myself to the can. My free hand was dedicated to grabbing the back of my gown to try to hold it closed so all the nice hospital employees weren’t subjected to my 65-year old ass. It didn’t work. But it’s a hospital and I was pretty sure they’d all seen worse. They could have better disguised their smirks. 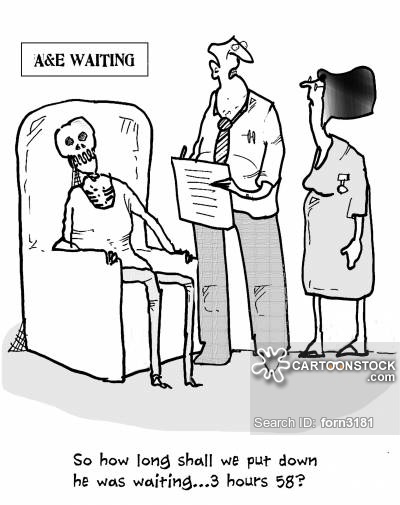 At one point the anesthesiologist came into my room during hour 3 and casually tossed off “there are still a couple ahead of you,” giving no indication as to how much longer it would be until my bed would be cleared for takeoff.  Turned out it was another hour. We could hear some of the staff talking about me saying, “that guy in 26 is still here!” Heh..corpses probably spend less time in a room.

By the time my turn came up it was only 20 minutes before my original time, which means we got to the hospital almost 4 hours early. The “team” surrounded me, squirted some potent juice in my IV and my descent to dreamland came within a minute. When I awoke about 90 minutes later my poor wife could finally ditch the sack with my crap and I could get dressed and leave. But wait…one more indignity. My wife was instructed to get the car and pick me up. The key here is the word, “where.” “Where” would she pick me up. This hospital has more points of access than a hooker. But my wife is smart, has a Masters and doesn’t put up with a lot of shit. She figured it out despite zero instructions and poor signage, and as I sat in a wheelchair in the cold outside the pickup point, she swooped in and rescued me. Time: 6:30 pm, more than 7 hours after we arrived for the 30 minute procedure.

My knee is healing, my “bee stings” are gone and most of all, I’ve covered my ass.