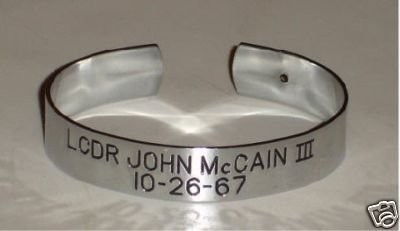 I had the honor of telling the story for CNN during the late senator’s first run for the presidency. Sadly, the video is long gone, but here is a transcript from when it aired during CNN’s “Inside Politics” Anchor Judy Woodruff read the intro.:

WOODRUFF: As we’ve been reporting this hour, our new poll shows John McCain with the highest favorable rating among the presidential candidates.

For one woman, a nun, the Arizona senator and his name carry special memories.

Our Ed Garsten reports from Michigan.

ED GARSTEN, CNN CORRESPONDENT (voice-over): Sister Mary Leanne long ago put away and forgot about this POW bracelet she bought back during the Vietnam War.

SISTER MARY LEANNE: This article appeared March 14th, 1973. I cut out the article and said, “Oh my goodness, this is my POW.” So I removed the bracelet, and I put it in a box of treasures.

GARSTEN: But then about three weeks ago, for no particular reason, the nun, who is now a high school principal, felt drawn to that box, and it was a revelation.

SISTER MARY LEANNE: And I said, “Oh my goodness, look who’s bracelet I have!”

GARSTEN: It was the bracelet inscribed with the name of a young pilot shot down and taken captive on October 26th, 1968, a man from Arizona named John McCain. Sister Mary Leanne knew there was only one thing to do. She had her opportunity Monday morning when McCain’s presidential campaign came through Michigan.

SISTER MARY LEANNE: I hope that this bracelet does not bring memories of pain and suffering that he endured while a prisoner of war, but to remember that while he was there a young nun in Garfield Heights, Ohio prayed every day for him and his release.

SEN. JOHN MCCAIN (R-AZ), PRESIDENTIAL CANDIDATE: Thank you, sister. I’m honored. And I would be doubly honored if you would keep that bracelet so that every once in a while when you look into your treasures, that you would remember me and all my comrades, including those who were not fortunate enough to return. And we still hope you’ll keep us in your prayers.

GARSTEN: Carrying an inscription from the candidate in her copy of his book and what she calls a radiating warmth from finally meeting him, Sister Mary Leanne, previously an undecided voter, promises she will.

SISTER MARY LEANNE: I can’t assure that my prayers are going to get him to the White House, but I’m going to do my best. I’ll do my best.

WOODRUFF: Quite a story.