See those awesome overalls I’m modeling? I bought those from the Sears catalog. In 1984. I still mow my lawn in them, saw wood in them, suck up my leaves in them and do any sort of hard work that’ll get me good and dirty and feeling revived in them. You can’t kill ’em. Oh sure, they have grass stains and paint stains and some other stains you don’t need to know about that just won’t come out in the wash. They have a million pockets for tools and screws and nails, a box cutter, a pencil for measuring, a level, some string a candy bar and my phone. There’s probably some saw dust living deep in one of those pockets from back when I bought them to build a deck behind my house in Atlanta. Yeah, washing ’em won’t free those particles–pockets are too deep. It’s ok. I like how they smell.

What I’m getting at is my trusty, dusty overalls remind me, every time I stuff my body into them, of the quality Sears was known for. Sure, I could have found a pair of decent work pants somewhere else but I specifically ordered them from Sears because I knew they’d be up to the task, and another task, and another and another and scores more. 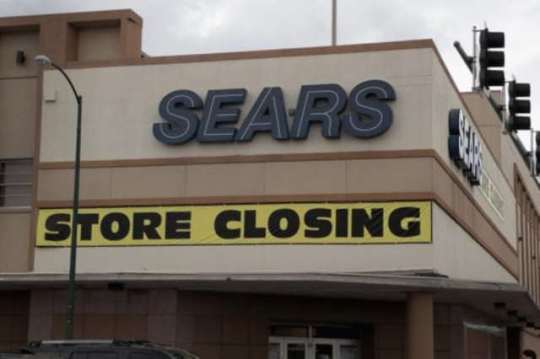 Oh folks blame Sears demise on not keeping up with Walmart or Amazon and that may be true, in part. But I look at it another way. Maybe shoppers who are too impatient or not discriminating enough or just plain cheap made the decision to exchange quality for price and expediency. I’m sure had I bought those overalls someplace else I’d be on my fourth pair by now, not my fourth decade with the same ones. Yes, the stores became dated and dumpy and less inviting, and for that I blame inept management that was tone deaf to the changing marketplace and consumer tastes and reacted way too late.

But I’m one to reward quality with loyalty, I don’t care how dumpy your store it. We always bought Kenmore appliances and they never failed us. Last year we moved out of a house we lived in for 25 years and the Kenmore fridge we bought for it in 1992 was still working like new when we gave a little goodbye tap and thanked it for its service on our way out.

When our watch batteries run down, we don’t buy one at Walmart and install it ourselves. We stop by the little watch repair desk at our closest Sears and let a guy with thick glasses and the sure hands of an expert do the job. It only cost a couple of bucks more to have it done right. Oh, when my Sears is shuttered I’ll go to the local watch repair shop because I like to support neighborhood businesses, but the Sears guy had me at “take two minutes!” And it did.

If my watch battery dies while I’m mowing the lawn, I just might show up at the repair shop in those Sears overalls…with the deep pockets that have been keeping my stuff safe and handy since 1984. I’ll reach way down, yank out my dead timepiece..bought at the store whose time has passed.