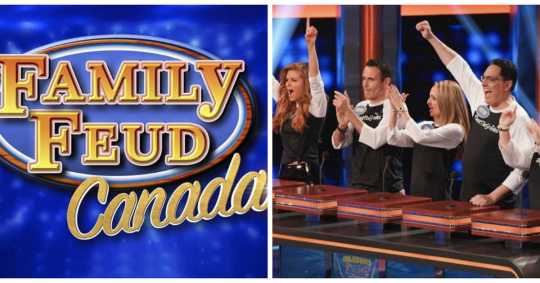 Just got back home from finding myself in the middle of two feuding Canadian families. It’s ok..no one got hurt but at least a few were embarrassed. Yeah..our family buzzed up Hwy 401 to Toronto for a taping of an episode of Family Feud Canada, as the old game show finally arrives in the Great White North.

My son is a game show aficionado and always wanted to see one live. Since he’s not much of a traveler, flying out to the west coast wasn’t an option, but a four-hour drive was.

It’s been many years since I last attended a game show. It was in the early 1970’s. I grew up in NYC so popping over to 30 Rock in Manhattan was an easy bus and subway trip. My friends and I showed up one morning and they happened to be recording a couple of episodes of “Sale of the Century” host by Joe Garagiola. The whole thing took barely 90 minutes…but Family Feud Canada was a whole different bowl of poutine.

They told us to show up at the CBC building at 11:45am. We showed up at 11:30 and there already was a line to check in. Once we did that, we were told to get in another line. Stood there for an hour. Suddenly the line started moving and we were stuffed into padded elevators in small groups and taken to the 10th floor where, we stood in another line.  Must be about time to enter the studio, eh? Naw…we stood for another hour while, we came to learn, the fun folks at Family Feud Canada were still rehearsing. Do you really need to rehearse, “survey SAID!!!!!” Apparently so.

Finally, we were ushered into a very large studio with a sparkling new, modern set. We lucked out and were seated in the second row on an aisle, but since the seats were angled, it was like scoring front row seats.

Nothing happened for awhile but then this chunky, bouncy, balding guy named Marty popped on stage and did the warmup. You know..get the audience happy and peppy and energized. Told us when to applaud and say “awwww” when a contestant gave a wrong answer and useful stuff like that. He also warned us about games we would be subjected to. Ah..the games. Later.

So the show finally starts and host, Gerry Dee bounds out and does the shtick. Yeah..I hadn’t heard of Gerry Dee either but came to find out he’s a famous Canadian comedian who does a long-running sitcom about a sort of schmucky teacher. It’s called Mr. D. I found some clips on YouTube and it is pretty funny.

Ever wonder what happens during the breaks? Well…our friend Marty pops out with a million watts of energy and orders us to get up and start dancing and when the music stops we’re supposed to freeze. If you don’t freeze, a woman named Tracie, also nicknamed “Madam X” comes by and slaps an X on you and that means you’re out. I swear I froze but Marty seemed to be appalled by my dancing and declared me out. Madam X was apparently also so disgusted by my personal choreography she didn’t even bother to slap the X on me…just said “sit down!” Yay! This went on for 10 minutes. Isn’t a break usually about two?

Next break, Marty comes out again and insists on annoying us with another game this time we all had to stand again. He would yell out things like, “whose favorite movie is Shawshank Redemption?” If you agreed, you sat down. I figured out pretty fast, it would be personally advantageous to agree to something quickly, so I plopped down when he told anyone who shaved in the last week to sit. That break was another 10-15 minutes. Now game shows usually record 5 in a day. These hosers were gonna be lucky to knock out one.

Finally the show proceeded but the producers wanted to review almost the whole thing before they got to the final, “fast money” round. Out came Marty again making us stand  or dance or yell “woo woo!” or some other nonsense to keep our energy up with Taylor Swift and Katy Perry braying over the PA. Maybe another 10-15 minutes goes by and they do the first half of “fast money.” Then it’s time to bring out the second family member to complete the game.

I was watching the prompter, having had many years of reading off prompters and all Gerry Dee had to say was, “OK, you need 22 points to get to 200 to win 10-thousand dollars!” Easy, right? Poor Gerry Dee. This was only his second show but he made the mistake of trying to put the words on the prompter into his own words. He wasn’t close. Family member #2 has to go backstage and run out again, then Gerry Dee would give it another try. No good. Rewind. Family to backstage, run out again, Gerry botches it again. Gerry Dee finally decides there are too many numbers and orders “200” be deleted. Family member #2 slogs off backstage, and, almost out of breath, runs out on stage again while Gerry Dee attempts the truncated version of the line. Aw..it only too three more times!

Finally nails it, the guy does get 22 points, the family from Yellowknife, Northwest Territories wins 10-grand and the game is over…right? Naw….we’re going to overtime! Marty’s out rousting us from our seats to jump and dance and woo-woo to still one more Taylor Swift song and we’re all trying to shake off what’s now become an ordeal. We find out the producers didn’t like how the show opened so they have to do it over and we have to stand, and clap and woo-woo! with the same energy we had at the start. Meanwhile the losing family is skulking just off camera watching this and while awaiting the cue to record, Gerry Dee cracks to them, “you’re thinking, can we fuckin’ go yet?” Biggest laugh of the day so far.

The open is re-recorded, the show is over and we get to leave, four hours after we first arrived. The actual recording of what will amount to 22 minutes of television took about 90 minutes.

It’ ok! My son had the time of his life, we got to jump up, dance, say woo-woo! a lot and have a cool experience. Survey SAID! “FUN, EH?”