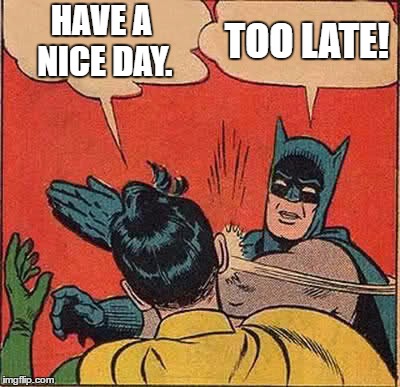 “Take it easy!,” “Take Care!,” “Take it Light!,” “Be Well!,” “Rock On!” We love to kind of wish people well at the end of a communication while at the same ordering them to do so. Sometimes people add these little phrases of mandatory good wishes about our health and general well being because they just nice, sincere people. Others just can’t think of more creative ways to end it. I guess it’s better than just stopping short, or writing, “shit, I’m outta bullets…later!”

Earlier today, just passing the time to socially distance myself from doing actual work, I watched an old George Carlin bit on the Tonight Show during the Johnny Carson era. During his short set Carlin ruminated about people telling him to “have a nice day!” It kind of pissed him off in only the way it could to Carlin. He suggested that perhaps he’d had enough nice days and would be selfish to have any more. Y’know..to leave some nice days for other people.

It got me thinking….

During this awful time we’re in right now almost every communication I’ve received–emails, texts, actual conversations–has ended with “stay safe!” No one bid me to have a nice day, or to take it easy or light or on the chin. One good person wished good health to me and my family…but couldn’t stop there. So..so hard to resist. Yes…the whole thing read, “Health to you and your family my friend……and STAY SAFE!”

It’s actually an appreciated imperative because, I have to admit, I get careless at times and touch my face or forget to wash my hands as thoroughly as I should, or get tempted to sneeze on the person in the produce section of the supermarket who decided it would be a good thing to squeeze every freaking cantaloupe leaving his viral detritus for the rest of us to host…then die..or at least feel really crappy.

Of course, being a native neurotic New Yorker, 55 years removed from my Bar Mitzvah, I must, must think of the down side. Hmm..that well-meaning person bid me to stay safe. What if I wasn’t safe in the first place? That would make the whole thing irrelevant, or at least presumptuous. Should the proper order of safety admonition be, “Get safe!” then the next time you communicate with the person, you give him or her the benefit of the doubt that they did so, then offer some support with “Stay safe!”

What if the person you choose to help survive the pandemic is a safety scofflaw? Ending things with “stay safe!” is a waste of effort since you know they’re gonna blow you off and act like a contagious schmuck. But realistically, you can’t get into a whole give-and-take about whether the person is, or wants to be, safe since you’re just trying to end the damn email so you can move on to binging Ozark.

Still, I like that we’re at least showing concern for our fellow human beings as we all try to avoid being infected with, or spreading, coronavirus.

Well..that’s all I have to say on subject, for now. Can’t think of a snappy ending. So..um…”Get Safe, Stay there… and then HAVE A NICE DAY!”