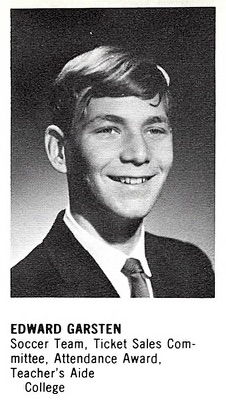 I hadn’t planned on watching Graduate Together last night but I stumbled on it an stayed with it. I’m glad I did. I feel terrible for all the seniors who have missed out on all the things that make senior year fun and memorable. As I watched I thought back to a couple of my senior years and remembered, sometimes even when there’s no pandemic, getting to the finish line can have it’s unexpected moments.

First…I present to you my embarrassing photo from Futura ’69…yearbook for Martin Van Buren High School Class of 1969, Queens Village, New York. Full disclosure, our high school team name was lame…the VeeBees. Get it? We instilled fear in no one.

Of course, being pimply teenagers we thought we were pretty hot shit being from Class of ’69…oooooooohhhhhh 69! So ready to take on the world… if the world was populated primarily by oversexed 18 year olds. I was only 17 and severely undersexed. I achieved high school graduation at an earlier age because I scored high enough on a test in 6th grade which allowed you to skip 8th grade. It was cool to go from 7th to 9th grade except pissed off 8th graders always wanted to punch you during lunch. 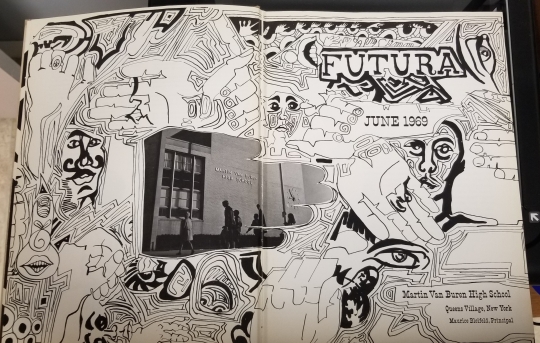 Senior year was eventful. It was during the Vietnam War and students were active in protesting it. Some of the more “radical” kids pasted anti-war stickers on street light posts with little explosives under them. If you tried to remove the stickers you might get burned.

Another set of students were a bit more obtuse. They set off a larger explosive in one of the administrator’s offices. That move cost us our senior trip to Shea Stadium to see the Mets.

It’s important to point out our school was hugely overcrowded–5,300 students on triple session. Seniors had the best schedule–early session. If you could manage to drop lunch, you were in by 8 and out by noon..plenty of time to take a part time job, or screw off the rest of the day. Sophomore had it the worst–late session. In at 12:30pm out at 5:15pm. During the winter it was dark when you got out. Upside, you could either sleep in or attempt to complete your homework in the morning because by the time you got home the night before it was time to watch TV.

So you can see that the run up to graduation was already fraught with unpleasantness. We did have a prom but I didn’t go. Let’s just say my acne would have been an impressive gameboard for connect the dots. Not exactly a chick magnet.

Our graduating class, as you can imagine, was also oversized–1,735 students. You could be 500th in the class and still be considered not so dumb. By the time graduation day arrived the sheer size of the class, combined with the weather, conspired to turn the planned pomp and circumstance into a frantic “run for it!”

You see, the top VeeBees decided to hold our graduation outside–at a bandshell in leafy Forest Park. Beautiful venue on a beautiful day. This was not a beautiful day. As we sat listening to the first remarks from our principal very dark, scary clouds moved in. The wind picked up to the extent we thought via the benefit of our mortar boards we would shortly take flight.

This did not go unnoticed by the principal who decided to call an audible, which was interesting since Van Buren High School was one of the few NYC high schools not to have a football team.

He looked at the sky, then gazed upon the 1,735 graduates, their parents and siblings and thought about how freakin’ long it would take to call out each of our names, have us traipse onto the stage and return to our seats. There was no way possible before the skies would open and, two months before Woodstock, we would be slopping in mud.

Suddenly, the principal made the call declaring “move your tassels over to the left. You’re all graduated! Now…quickly head to a picnic table located in the rear where your diplomas are in envelopes in alphabetical order. Good luck! Bye! Hurry!”

And so went the the Martin Van Buren High School Class of 1969 into the world. We just beat the rain, prepared for whatever storms life would toss us in the future.

This is how I looked four years later at in my college yearbook. My parents refused to display it. 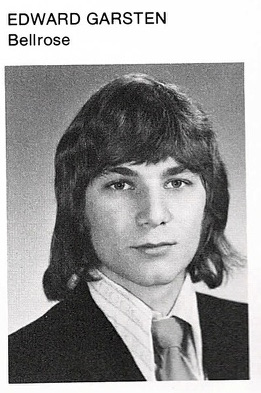 Ah…it’s graduation season and the youth of America is chomping at the bit to snag that sheepskin and move on to the next chapter in life–whether it’s college, a career or rearranging the parents’ basement for long-term mooching in lieu of revenue-producing endeavors.

My favorite graduation was when I was sprung loose from high school. It was 1969 and not one of the 1,735 graduates at Martin Van Buren High School in Queens Village, NY could swear on a Bible they didn’t, at one time, stupidly say to someone, “heh heh..I’m in the Class of ’69.” Yeah..we were Beavis and Butthead years before the animated slackers manifested the description of the show in its disclaimer as “dumb, crude, ugly, thoughtless, sexist, self-destructive fools.” Yay MVB Class of ’69!

Anyway, with 1,735 graduates that’s a lot of bored teenagers to schlep on and off the stage as their names are called, but Mom Nature did us a solid. Our graduation was held outside in a park. Rain threatened and the thick, gray clouds overhead promised to make that threat real. With that in mind the principal and others wisely decided to can the roll call and stage/perp walk. They referenced the rainy forecast and gleefully announced, “in light of the expected storm…you’re all graduated! Move your tassel over and head for one of the picnic tables where your diploma is sitting in alphabetized piles. Find yours and run! Congratulations…and get going! It’s gonna pour!”

Graduation in 30 minutes flat. Four years of hard work ends in a 15 second sprint. Always wished I was tall enough to make the track team.

My next favorite graduation came many years later when I was working for CNN as Detroit Bureau Chief and correspondent. The great staff in my bureau discovered that in the small Upper Peninsula town of Calumet the local high school’s graduation would be feature not one, or even two, valedictorians….but 8! So we arranged to travel up there on a little puddle jumper that would get us part of the way up there to Houghton, Michigan, then drive the rest of the way. We hit the ground running once we arrived, shot profiles and interviews with each of the 8 honored students then covered the evening graduation, which took a long time because there were 8 valedictory speeches! It was late by the time we were done, but then we had to pull an all-nighter to get the piece written and edited in time to make the morning shows.

This, of course, meant the creative process being fueled by junk food and beer and our tired and cranky, and beer-infused shooter constantly harping on me to get the damn script done. “You done with the effin’ script yet? I’m tired and we’re running out of beer!” Yup…got it done, he shook off the buzz and got it done and fed to Atlanta in time to make air.  I think it turned out pretty well. I’ll let you be the judge of that.

I would have loved to see what would have happened, though, if they had held it outside that night. Looked like rain.