This week a rousing Bob Seger concert was the last event to be held at The Palace of Auburn Hills, north of Detroit. That’s because its primary tenant, the Detroit Pistons, have moved down I-75 into the new Little Caesar’s Arena..also the new home of the Detroit Red Wings, who fled the aging and obsolete Joe Louis Arena.

Unlike “The Joe,” The Palace is a state-of-the-art facility, opened in 1988 and constantly improved and updated. Its main fault is being located off a freeway exit deep in the Detroit suburbs, and far from the team’s fanbase. Even so, The Palace has been one of the premier event venues in the country.  Fans loved it, musical acts appreciated the sound and staging and athletes had few, if any complaints.

But about 18 months from now, the Palace will come tumbling down to make way for, perhaps, the headquarters of an automotive supplier or tech firm. I totally understand the business reasons for its demise. Tom Gores, who heads the company that owns The Palace, the Pistons and its entertainment business, made a Faustian deal with arch competitor, Olympia Entertainment, owned by the Illitch family, which owns the Detroit Red Wings, Detroit Tigers, Little Caesars Pizza and, oh yes, the brand spanking new Little Caesar’s Arena, where the Pistons will now play their home games.  Two competing entertainment and sports titans, jumping in bed together, so they can both make more money.

I have no issue with replacing horribly obsolete buildings but The Palace isn’t one of them. It breaks my heart, and my head, a little, to think of the utter waste of a perfectly usable facility, the work put into it and all that money spent to maintain it as a top tier venue.  It’s just indicative of our disposable society that reeks of minute attention spans and the constant need for something new and shiny.

Can you imagine if, in ancient times, the Romans decided The Coliseum had to go because gladiators just couldn’t face lions anymore without being able to relax first in a cushy lounge with 38 selections of wine and grog, and spectators required complimentary thumb coozies to keep their digits warm while deciding whether to point them up or down, but not before grabbing a bite from the exclusive “Nero Club.”

I can hear the conversation now between developer Leonidis Slumlordis and Coliseum owner Julius Sleazer.

LS: “Julius! Look at this dump! It’s all stone and mud, every third space on one of those rock-hard benches has an obstructed view because of those damned columns, and, by the way, have you sat for more than X minutes on one of those seats? They’re so hard they flattened my poor gluteus circus maximus!

JS: “Look Leonidis. I get what you’re saying but ever since free agency entered the gladiatior game I have to cough up at least MMM lire to each two-legged lion bait just to put his sandals on the dirt. That, plus new demands from the lion’s union that each gets its mane moussed before each battle so they look good on Instagram, and we stick to gladiators with enough meat on their bones to at least make them a decent meal.

LS: “That’s not the point, Julius. Thumbs up, thumbs down is old technology. Spectators want something more modern, like what’s going on in the Mesopotamia Carnage Conference. All their venues have moved on from thumbs to providing each spectator with red and green plumages. They stick a red one in their hats for “let the bastard die!” and a green one for “he’ll be lion lunch anyway, but good luck!”   That’s high-tech stuff! Season ducat spectators are also demanding more creature comforts such as valet chariot parking and luxury dungeons where their slaves can chill while they enjoy the bloodshed. They’re also demanding unlimited grog and a special section for having their way with high quality wenches, like they do at Alexandria Arena. They don’t call him “The Great” because of his battle skills. The guy is a genius at marketing debauchery and torture. ” 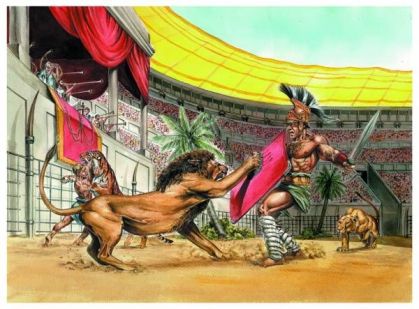 JS: “So what are you proposing. A renovation?

LS: “Not at all, Julius. Think bigger! Let’s knock the place down and build a brand new, ultra-modern den of iniquity. It will be state-of-the -archaic. A wonderful place for gladiators to die horrible deaths and an even better place for spectators to enjoy watching it.

JS: “Hmm..I get what you’re saying, but I’m not buying it. The place looks like it could stand for another, I dunno, couple of thousand years.”

LS: Ok, Julius, but you’re an idiot. You’ll lose all your customers and your business will just be in ruins.

JS: No problem, Leonidis. I understand “ruins” is the next hot ticket in the just-developing travel industry!”