The person I ever interviewed for a job sashayed into my office, put on a really bad Marilyn Monroe voice and purred, “you KNOW I’m the one for you.” I explained as gently as I could that while we paid by the hour we required our employees to work an entire day, not one hour at a time. 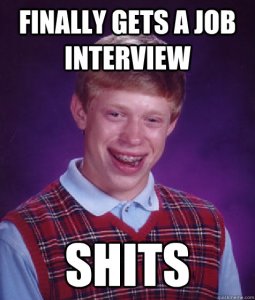 This was at a small radio station in upstate New York where the AM side was live with a DJ, and the FM side was dentist office music. The position we were hiring for was for the FM side. The duties included spinning very boring music and answering the phone. There wasn’t even a microphone in the studio. No, this person could not speak on the air. All the announcements were pre-recorded.

Choosing the right candidate was very important because we needed someone who not only could tell the difference between Montovani and Percy Faith, but could answer the phone without swearing at the listeners. This didn’t always work out. One job candidate who slipped through the cracks charmed us during the interview, then horrified us when a listener asked if school had been cancelled due to a snow storm. “Aren’t you listening to the effin’ station you idiot! No, your damn kid has to go to school!”

Of course, she was quite beautiful, and this being 1977, our standards were as low as our morals.

Many years later, as the CNN Detroit Bureau Chief, I received many more resumes and job inquiries from less than ideal candidates.

I always appreciate creativity, but not when it’s idiotic. For instance the gentleman who sent a cover letter that resembled the “Sock it to me” wall from the 60’s show “Rowan and Martin’s Laugh-in.” It actually had little doors you had to open to read about this guy’s attributes. He forgot to include, “time waster.” I quickly closed the door on his chance of being hired.

Then there was the guy who thought life wasn’t tough enough for me, so his resume was a multiple guess quiz about his experience and qualifications. I decided he was “none of the above” for me.

Which brings me to the current crop of hopefuls—the blessed Millenials, or, as I like to call them, the Mal-lennials because they’re just bad news.

Work your way up by doing your time in the sticks making bupkus while gaining valuable experience and making beginner’s mistakes? NFW! One might tweet.

No, they come into a job interview to basically find out if you’re worthy of their talents.

Don’t get me wrong, every generation had its share of cocky, egotistical jerks who think the world owes them a living. But the current version of genetic Texas Hold ‘em is no river and all flop. Just once, I’d like a kid to come into my office, say he/she would like to start at the bottom, learn the ropes and develop to become a valuable employee. I get dealt one of those…I’m all in.