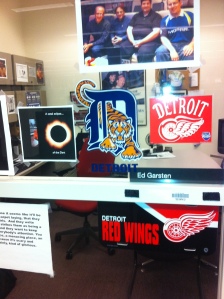 I have no affection at all for offices. A person trying to woo me to his firm promised me a corner office. It was a generous gesture but I told him that under no circumstances would I accept a corner, or any other office. I ended up not taking the job anyway because I was an out-of-work journalist and I wasn’t quite ready to switch to something new. I also despised offices of any sort but loved newsrooms, which are, in effect, offices with just the right proportion of chaos, collaboration and profanity.

A couple of years ago as a sign of a promotion, I was ordered to move from my open cube to a closed office. “If I’m being promoted,” I asked, “why am I being placed in solitary confinement?” Alas, I now view the general prison population through a glass window. Sometimes it’s fun to have one of my co-workers on the “outside” play the game of “prison visitor” and place their hand on my window and I place mine opposite from the inside..just like in “Birdman of Alcatraz.”

Thanks to the Chicago Auto Show last week, I hadn’t’ seen my office or desk in 6 days…until today. I jangled my keys like the “office warden,” opened my door and breathed in the squalid stale air that could only be neutralized by brewing coffee and inhaling a box of Altoids.

For a brief moment I thought about tidying up the mess on my desk I left behind, but why bother? That would only make room for a new mess and I was already quite familiar with the desk-tritus on display, including the Post-it note with my computer password from 2009. I keep forgetting it. Damn passwords!

The sad part is I’ve now grown used to spending my workday holed up in my human Habitrail. There are all sorts of places to hide stuff I should have tossed years ago, I can make phone calls in private and I can engage in the guilty pleasure of watching the YouTube video of Katy Perry in her skimpy jungle outfit singing “Roar,” uh… during my lunch break…of course.

In fact, I think that tomorrow I’ll start the process of reforming. I won’t toss used Keurig pods under my desk and tell curious visitors they’re my dead pet mice, or rationalize a pile of randomly ordered file folders by calling my system “Anarchic Alphabetizing.”

I might even take down the sign on my door that warns potential visitors, “Where productivity comes to die.”