One thing, among many, an employee hates to hear is the boss saying, “go ahead, take as much time as you need to recover. We’ll get along just fine.” At face value it seems like the boss is being really considerate, and probably is. But honestly, who wants to be told the company won’t come to a screeching halt without them.

I’ve spent most of my life as a journalist and newsrooms are perpetually short-staffed, which means calling in sick does not win the “take your time, get better,” reaction from the boss. It generally sparks “if you’re not dead, you’re well enough to cover your assignment.” That’s not technically wrong. In fact, three days after undergoing removal of a malignancy in my right shoulder, with a drainage bag and tube sticking out of my flesh, I never mentioned it to the CNN national desk and I covered my story. All I had to do was hide my apparatus, and a few blood spots, under my blazer when recording my standup on a bobbing speed boat and no one was the wiser. At CNN, as at many other companies, the whole idiotic hero thing is part of the culture.

When I made the switch to PR at a large multinational car company, things were markedly different. I was now one of a global workforce of roughly 45,000, showing up each day to the corporate Xanadu, along with 12,000 other contributors to the cause.

As I trundled from the parking deck to the employee entrance of the massive complex, I blended in with the mob swiping their badges in order to make the revolving doors turn, giving them entree’ to their workspaces.

Each day for my 10 years and 29 days at the company I would have the same two thoughts:  Would anyone care/notice if I didn’t show up? What the hell do all these other people do and would anyone care/notice if any of them were absent? Sure, it takes a lot of people to run and operate a giant company, but honestly, does it take that many? I wasn’t being arrogant. I was simply wondering how many of us would be considered superfluous and not, sorry, “core.”

It hit home to me early in my run when I noticed a of employees who grabbed coffees from the fancy java stand in the complex and just stood around in the common area, sipped and bullshitted for what seemed like an excessive amount of time. Like two hours. Obviously, they’re not being missed, so why are they being granted paychecks? In newsrooms, you never have time to waste and if you attempt to waste any, a thorough ass-chewing from an editor can be expected. Early in my TV career, my no-nonsense assignment editor would bark at lollygagging reporters, “hey! you gonna turn a story or just sit there and yank your tuna?” I assure you, tuna yanking was at a minimum in that newsroom. 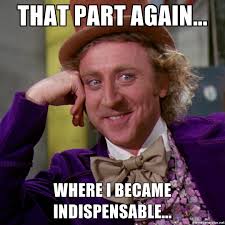 When the bad times came in 2008-2009 and GM and Chrysler went bankrupt, suddenly thousands of workers were given cardboard boxes and told to get lost. You never knew when your time was up until you got a box and brusque brush off. Over and over again I told my team, “Make yourself indispensable. Make the company understand what it would be losing if you were gone.”  We constantly marketed our accomplishments and abilities to the higher ups so they fully comprehended our value and the strategy worked. We presented hard documentation and third-party endorsements. I did have to lay off one of my nine team members, but a couple of years later, when things settled down I was able to hire him back. Other teams were not as lucky. In fact, some were simply eliminated.

I’ve always found that abiding by my job description is a pretty fast track to obsolescence. Finding ways to take the basic premise of your position then using a recipe combining one-part skills and large dollops of guile, salesmanship and imagination not only makes the work day more fun and rewarding, but generally surprises and delights your employer and results in as much job security as can be hoped for.

No, I don’t want to be that person I see walking through the revolving door, wondering if their absence would make any difference at all in my company’s success. Sure, no one’s irreplaceable, but there are kickass employees who are, indispensable. And if you’re not indispensable, you’ll likely be dispensed with.