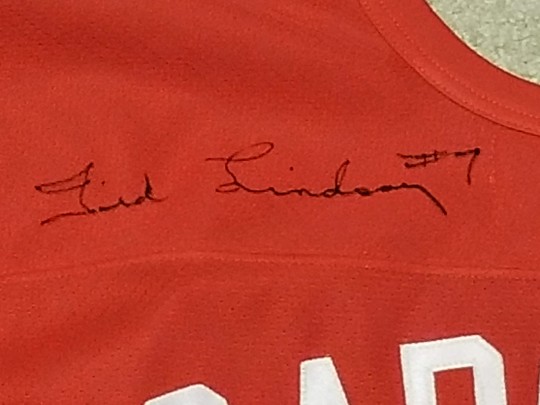 A sad morning as I woke up to the news the great Detroit Red Wing Ted Lindsay had passed away at age 93. As a New York Rangers fan, growing up in Queens, I was not amused by “Terrible” Ted”s regular manhandling of the Blueshirts, but as a hockey fan, I respected him.

Fast forward to September, 1998. I had lived in the Detroit area for 9 years and while still a Rangers fan at heart, I grew to love the Red Wings. For our 25th anniversary my wife sent me to the Detroit Red Wings Fantasy Camp after seeing a promo for it during a game. Keep in mind, I hadn’t played ice hockey since college. I graduated in 1973. I still had BOBBY Hull skates. Antiques. And a wooden stick.

I was horrible but what a kick. At the end of the weeklong camp we played a charity game at The Joe and our teams were combined campers and Red Wings–some current, but mostly alums.

So what a thrill when I found myself on a team with the likes of Chris Osgood, John Ogrodnik, and, yes, Ted Lindsay. Indeed, since he wore #7 and I wore #8, I was introduced right after him.

Shortly after, on a line with Ted and Osgood, I got an assist with an outlet pass, then, between the first and second periods, Ted was nice enough to sign my jersey. Watch the video. It’s priceless. It has the introductions, my assist and Ted signing.

It’s an experience I’ll never forget. It was an honor to play with Ted Lindsay, have a few words with him, see a legend up close, and best yet, see, firsthand he wasn’t terrible at all. Ted Lindsay was a gentleman–even when he rocked the bones of his opponents. RIP Ted Lindsay.