Reading about the celebrities and other rich suckers who shelled out fortunes to get their lil’ darlings into prestigious universities through illegal means I can only think about what my parents did to get me into college.

Here’s how it went down. In 1969 my old brother was going to medical school. That’s expensive. Being four years younger, I was about to become a freshman someplace else, which my father stated plainly “would be much cheaper.”

There were two choices. As a resident of New York City, I could go to a city college. A new one had opened called York College. At the time it was no more than a glorified trailer park since the real campus was under construction. The tuition would be a backbreaking $35 a semester. Seemed like a good deal. I could hop one bus, transfer to another and be there in 30 minutes. I wouldn’t drive because there didn’t appear to be any place to park.

There didn’t appear to be any athletics or night life to speak of, unless you consider hanging out at the nearby falafel stand after the sun went down for some “after hours chickpeas.”

I didn’t end up at York College because my parents were concerned I was hanging around some “bad kids” and should therefore be sent to a school many miles away. Not as cheap as York College were the schools in the State of New York, or SUNY, system. I was accepted at Oswego State, about 30 miles north of Syracuse and built along the shores of Lake Ontario. Sound idyllic? Perhaps 2-3 months of the year, definitely. The rest of the year it was a windblown, snow-covered Siberia with an annual snowfall of at least 120 inches.

Nope..not the Ivy League! Closer to the Icy League!

This would all cost more that York College, but much less than Yale. All-in, tuition was $440, and room and board $1,139 a semester. Still a bargain. My dorm was right on Lake Ontario with a million dollar view overlooking the water–much cooler than a bunch of stringy, clingy ivy. It was also a kick wondering what it looked like on the far shore over in Canada where the beer was much stronger. One day I would imagine rowing to that far off land in my blow up raft that I had bought at Kmart for 7 bucks. Such is the effect of substances available to “serious” academics such as myself. 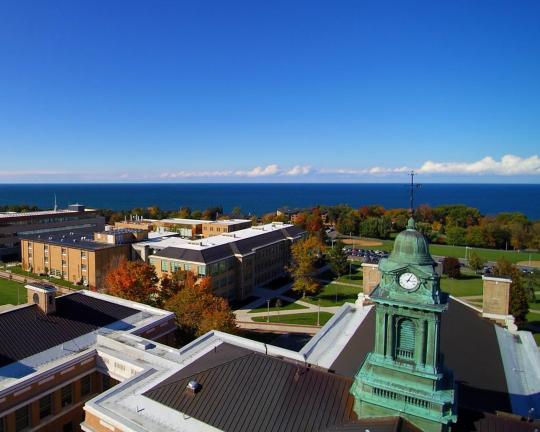 My quality of education for that bargain-basement investment? Well..my first class was Sociology 101. It was in a giant lecture hall with Doc Richmond presiding. Remember, this was 1969 and everything was extremely groovy. When the esteemed professor said he really wished there were urinals for women, the rapt/stoned class duly nodded and remarked how exceptionally groovy Doc Richmond was. What a great college!

What I didn’t expect was to find both a career and wife at Oswego. The former helped begat the latter. During an especially raucous party where many beer kegs were tapped dry and upper classman informed me I had a real knack for making strange voices and would therefore be a natural to work at the campus radio station. Talk about groovy! The next day he took me to the station and told the guy on the air I should be a DJ. The guy yawned, told me to show up the following Saturday and I’d be on the air for a couple of hours. From that day, for the next 40 years, I was on the air somewhere from various radio and television stations to CNN.

The finding the wife part came from a group of comely co-eds (they said that back then) who became regular listeners to my show and called in requests. It turns out the upper classman who dragged me to the radio station was a mutual friend and set me up with one of them. It was love at first keg party and we got married six months after graduating. It’s worth noting that several years after our wedding at a catering hall in suburban Rochester, NY, we returned to find out the place had become a topless joint. Made sense.

The point of all this is that it’s not worth the effort to break the law and fork over all sorts of big money to get into a fancy school. Let’s face it, these celebrity offspring were probably too dumb to get in on their own which means they may have flunked out anyway, making the whole idiotic, and illegal scheme worthless.

Personally, I’m glad I was able to go to a school that didn’t break my parents’ budget, making it possible for them to have the great retirement they deserved. I got just about the amount of education I needed to get through life, a fine career and a great wife–all for a few grand a year. Now that’s pretty freakin’ groovy!