Thought you might like to know I recently bought a blue thing that’ll keep my sunglasses from sinking in the river…and a kazoo. These were not impulse items. Indeed, I had considered both for some time but never had the ambition to search among many stores, or online, for either. But I found them them mere yards apart at an old emporium in East Aurora, New York. It’s called Viddlers 5 and 10 with the subtitle, “you never know what you’ll find there.”

Let’s clear up something first. The 5 and the 10 do not mean nickel or dime. I found nothing there that costs pennies, but I suppose you could make the case that you do need at least 100 pennies to make a buck and most items there cost several of those.

Unlike the 5 and 10-cent stores I remember as a kid, Viddlers doesn’t have a tank of homeless goldfish for sale or a lunch counter serving up malts, BLTs or Bromo Seltzers.

What it does have is the luscious aroma of old wood-planked floors that squeak with every step, a million little tchochkes begging to collect dust in your home, lawn art, pots and pans, board games, paint, back scratchers, a billion types of candy and other sweets, books, magnets for your refrigerator with a picture of the store, (bought one of those too) and silly signs.

I love the one that says, “Unattended children will be given espresso and a free kitten.” No one actually buys them, but if you wanted to, Viddlers has ‘em for you.

How about a dopey hat that looks like a cheeseburger….or a bison? Might be a hit at the synagogue where every other guy just sports a little round yarmulke? I think bisons are kosher, no? 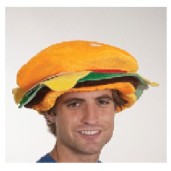 Then there’s the toothpick bird. Got something caught in your teeth? Touch the birdie the right way and it coughs up a handy toothpick. I can only hope Viddlers finds the floss flounder one day. 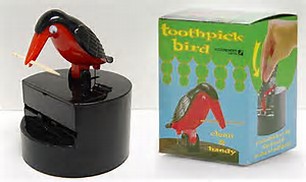 When visiting Viddlers it’s important to check out every one of its many rooms and every corner in each room because that’s where some of the best stuff is hiding, like a some odd sized pan or garden gargoyle.

I found my kazoo begging for attention on a lower shelf. It competed against two other kazoos, but I settled on mine because I liked the box and color. I wanted to try it out, as you would with any musical instrument, but I was told it’s not cool to slobber over something you may not decide to buy. So I took a chance and gambled two bucks it would mesh with my particular playing style.

The blue thing for my sunglasses was hanging near a bunch of toys, and not anywhere near sunglasses, which I’m not even sure Viddlers sells. I need this thing because I’m always afraid my sunglasses will fall off my head and into the drink when I’m kayaking or attempting to walk across Lake Michigan to Milwaukee. Now I can enter water with full confidence that no matter what unfortunate circumstances befall me, my sunglasses won’t sink.

Viddlers hasn’t always been called Viddlers. According to its website, “Robert S. Vidler, Sr. opened “The Fair Store” in the quaint village of East Aurora. Family legend has it that his mother-in-law complained of having to go all the way to Buffalo (16 miles distant) to buy a spool of thread – and Robert saw the opportunity for a new, local business.”

He changed the name to Viddlers 15 years later.

This was technically my second visit to Viddlers. My first didn’t last long. We intended to stop in on our way home to Michigan from my in-laws place in  Rochester, N.Y. East Aurora, which is near Buffalo, is way off the route but my in-laws had enthusiastically recommended, so we took the detour. Hmm..plenty of parking in the back. Good start. Uh oh…door locked. It was Memorial Day. Sign informed us Viddlers not open on Memorial Day. Bad ending. So now it’s a year later and we avoided all holidays and tried again. This time there was still plenty of parking, but many of the spaces were taken…and the door was open.

We may go back to Viddlers again some day. I do like corn on the cob and ribs. I hope the toothpick bird is still available.