I’d been dreaming of this day since some time around 1966. Please be patient. The yarn will take a little while. I was 14. Lots of pimples, skinny, awkward, but like millions of others like me, infatuated with the Beatles, Rolling Stones and the Byrds. Oh…the Byrds. Jim McGuinn’s granny glasses, urgent vocals and that damn 12-string Rickenbacker guitar that made sounds never before heard. Chiming, jangling..think “Mr. Tambourine Man and “Turn, Turn, Turn.”

Those opening notes that instantly announced what was to come and sucked you in and sold so much wax. As soon as the first notes rung in you jammed the volume of your transistor radio and did not give one shit if the kid sitting next to you in the library was cramming for finals. The truth is, that kid instantly forgot about physics and got lost in the ringing of the Rickenbacker’s 12-strings as only McGuinn could command them.

I had only begun playing the guitar a year earlier after years of suffering with an instrument that was popular pre-British invasion…the accordion. My mother encouraged my brother and I to play the squeeze box because the right hand played the same as the right hand on a piano. But we lived in a 440 square foot apartment in Queens and there wasn’t room for one, so the accordion would have to do. I actually played it in my first garage band in junior high school called “The Scenics.” It was a strange combination of my accordion, a guy on the sax, a drummer who only owned a snare drum with no stand, so he propped it on a chair and a chubby guy with a clarinet, rounding out possibly the worst band in history. We decided to play for our music class because you could get extra credit for performing. We played “Moon River,” but then the guy on the sax went nuts, left the stage, walked up to the most buxom young lady in our class and started playing “The Stripper.” Our teacher just muttered, “oh my,” then refused to give us the extra credit we definitely did not deserve.

Shortly after that my mother began saving trading stamps. Not S&H, which were the most popular back then, but the upstart Plaid Stamps. Once she accumulated 10 books she cashed them in for a nylon string acoustic guitar. It came with a little pink pamphlet that showed you how to play a few basic chords and contained the charts for tunes like “Mary Had a Little Lamb” and “She’ll Be Comin’ “Round the Mountain.” Well..as any guitar player knows, you can play a ton of tunes with just a few chords in your quiver. That’s when my friends and I started hanging around the neighborhood music store called Lee Benson’s. It was owned and run by a wedding and bar mitzvah band trumpeter Lee Benson who’s real name was Lee Lebenson. Thin, balding, mustachioed,  very mellow and very patient. Teenagers with dreams of becoming rock stars hung around the store, bullshitted with Lee about music, and bought tons of picks, strings and sheet music so we could learn to play some of the hits of the day. Here’s the sheet music for “Revolution,” “We Can Work it Out,” and “I Saw Her Standing There.”

Whenever you paid for the music Lee would smile and say “great tune, great tune.” 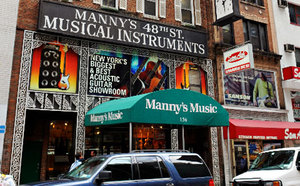 Hang onto those thoughts of Lee Benson for a moment while I skip to the next chapter of this tale. My friends and I often hopped a bus and subway to catch a Knicks or Rangers game at the old Madison Square Garden, about a mile up 8th Avenue from where it is now. We’d arrive early then walk around the area and invariably ended up on 48th Street near Times Square–New York’s “Music Row,” so-named because of the strip of large music stores. There was Rudy’s and Sam Ash, and, my favorite, Manny’s. Ah..Manny’s. You never knew who would be just sitting on a stool just jamming away. Anyone who was anyone in the music biz bought their stuff at Manny’s. Jimi Hendrix, Bob Dylan, the Beatles, the Stones…everyone.

It was a magical place and there, in the front window was that Rickenbacker. Only moments before a guy with a 12-string Rick was playing the opening to the Beatles’s “If I Needed Someone” with a little crowd around him in one of the aisles. What I wouldn’t do to own a Rickenbacker. But man, the price tag dashed my dreams–$365. Holy crap! With an allowance of a buck a week, I’d be in Depends before I could even think of owning one. I was obsessed but also realistic. It just wasn’t gonna happen. Ever.

But the next time I headed over to Lee Benson’s it looked like he had a Rick in his window. What!?! It had that same fireglow finish, acoustic slit in the body and….and….the brand name “Ideal” on the headstock! WTF? I immediately starting quizzing Benson about it and he said it was a “quality recreation” of a Rickenbacker at a fraction of the price–$75. HUH? In reality, a Japanese knockoff. Smart salesman that he was, Benson locked in on my obvious infatuation, took the fake Rick from the window and set it in my hands. I started playing. Not bad..not bad at ALL! Now, where was I gonna get 75 bucks. Well…I had 80 in my bank account. Just enough to cover the price and the tax. After a spirited spat with my mother about cleaning out my account for a guitar, she gave in and I took it home. Smart guy Benson even wrote “Rick” on the receipt. Such a smooth bullshitter he was. My friends oohed and ahhed and I swung that thing like it was a real Rick.

I joined another lousy garage band called The Purple Perception. Yup..we sucked but we practiced in our drummer’s basement which always attracted his hot, blond next door neighbor sisters to come over and watch. We were too awkward and stupid to get anywhere with them but at least it was an audience. They would be our only audience because we also sucked too badly to get any real gigs. Yup..we broke up after a few months.

I took that bogus Rick with me everywhere. Played it day and night, hauled it up to college, tortured my roommate and it’s been with me ever since. It still actually looks and sounds pretty freakin’ good. But it wasn’t a real Rickenbacker. Over the years I added a Fender Stratocaster and Telecaster to my collection, as well as an electric bass, and acoustic 6 and 12 string guitars–along with a set of drums. But no Rickenbacker, which now would cost more than $3,000. I did well in my career and could certainly afford one, but just never felt I should spend that much money on a guitar. Until this weekend. I found what was billed as a “used” 12-string Rickenbacker on the Guitar Center store website.

It was at the store up in Saginaw. I contacted the store and the guy told me the fellow that traded it in only played it twice, was really more of a collector and just didn’t want it any more. I drove the hour and 20 minutes up I-75 to Saginaw to check it out and it was in mint condition. For the first time in my life I laid my hands on a real Rick–a 330 12-string..the same one the late Tom Petty played and Jim McGuinn had sometimes used. I plugged it in to the Vox amp in the store and started shaking. I took a pick out of my pocket and started playing the distinctive intro to “Ticket to Ride,” then “Mr. Tambourine Man,” then “Here Comes the Sun” and even the riff from Bruce Springsteen’s “Brilliant Disguise.” I looked over at my son who was just smiling a smile that only comes from one’s senses being pleased…and maybe being a little embarrassed by his old man trying to, but failing miserably, to look a little cool. I asked him if I should buy the guitar. All he could say was “you HAVE to have it!” Now I do.

It’s an almost lifelong dream come true and a lesson that no matter how long you defer a dream, it’s never too late to try to bring it to fruition. Whether it’s a career goal, athletic accomplishment, educational attainment…never just shrug it off, because no matter how long it takes, it’s worth the effort. Never stop dreaming and never stop trying to make them come true. I’m gonna go play that Rick now..the real one..the real dream come true.