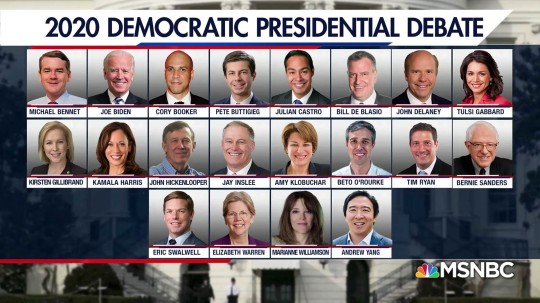 Been thinking a bit about the challenge of 10 candidates at a time trying to make their best pitches during the two-night Democratic version of “Survivor.”

The combination of binge-watching “Veep” and lack of REM sleep conspired to create this imaginary scenario of how it might go.

NBC Moderator: Welcome to the first Democratic presidential debates for the 2020 election cycle. Since we have so many unknowns, er, candidates on the stage mixed in with a few old guys, er, elder statesman, we’ll have to set down a few rules to make this work.

First, to save time, we’re boiling your names down to one or two quick syllables. For examples, you, from South Bend, you’ll be addressed as Butt, while long, tall, spastic hand-waving guy from Texas will be Butt-O. See the difference? Makes sense, right? There won’t be a doubt whom we’re addressing. The former Veep will be identified as Bye and the other old guy from Vermont will be Burn. The senators from California and Massachusetts will be recognized as Harry and Tonto respectively. Sorry if we seem disrespectful at times, but this is television and we don’t care.

As for the others whose polls barely show a pulse, we’re just going to address all of you as Who? Just jump in if you have a thought, but be prepared to do so only when we’re in commercial. That’s simply to keep things moving and because, again, we don’t care.

Some of you won’t like the names we’re assigned you but let’s face it, for at least half of you, it doesn’t matter because most Americans don’t know who you are anyway, so go with it and enjoy your 15 seconds of face time in between ramblings by the front runners, aka, those sucking up all the donations, airtime and are prominent enough to earn an obnoxious nickname from President Trump.

We’ll start with opening statements. Due to the number of candidates and time constraints please limit your statements to a 20-second pre-written soundbite you hope will go viral.

From there our panel, chosen from recent visitors to the Bronx Zoo, will fire off piercing questions. Each of you will be limited to either two-word responses or one hand gesture. Rebuttals are allowed, but, again, due to time restraints they will be limited to the following choices:  “Huh,” “Uh uh,” “Well, yeah, but,” or simply a moment of arched eyebrows or a tight grimace.

At the end, each candidate will be afforded a closing statement of 12 seconds or less. That pretty much kills the idea of parenthetical thoughts or tangents and gets us off the air on time because no one in this great country wants to miss even a second of the popular NBC series “Filthy Rich Cattle Drive.” which, you have to admit, is genius programming following this useless cattle call.

We realize not every candidate will have to time to fully flesh out his or her talking points but then again, that’s not why you’re watching, right? You’re here for the inevitable embarrassing screw-up or pantsing of one candidate by another frustrated when his or her arched eyebrow rebuttal was laughed off as an incomplete response.

So if everyone is ready, let’s to this thing! Time’s wasting!

While many voters are in struggling over the POTUS choices, I think back to the 1964 elections: Goldwater vs LBJ. My father hated them both but respected our distinguished neighbor..a man named Guido Bruhl. His son Gunther was a classmate of mine. His wife Christine was a seamstress whom my mother employed from time to time. On election day my exasperated father declared, “I’m voting for Guido Bruhl!” No matter that the excellent Mr. Bruhl was ineligible as he was born in Germany and even wore Liederhosen on occasion. From that time on, each election cycle, when the choices were less than optimal, our family let it be known our support was firmly behind Guido Bruhl. We never bothered to inform Guido Bruhl of this fact, which was a strategic move as he was a very large man with a mustache.

The only episodes I like to watch of “The Voice” are the blind auditions. If you’ve never seen them, the premise is simple. The judges have their backs to the singer. If they like how he or she sounds, they turn their chair around, indicating they’d like that person on their team. This way the singer is judged, at that point in the competition, simply on ability. In subsequent rounds the competitors are visible and further judged on ability and style.

It got me thinking that this would be an excellent idea for choosing a president, or any office holder. Candidates should be hithertofore unknowns, kept under wraps through the first debate, which is not televised. All the electorate has to go on are the candidate’s responses. An instant online poll is held where voters, in effect, turn their chairs around for the candidates who seem the strongest. The surviving candidates…a maximum of 6…get to move on to the subsequent rounds which involve debate duets and getting advice from political mentors, none of which are Adam Levine or Pharrell, although Christina Aquilera makes sense to me in a very high C kinda way, or that guy on CNN, Smerkonish, because he’s a little intense and his name sounds like a pipe tobacco. Also eliminate Blake Shelton since he would be more interested in finding out from the female candidates if his stubble is the right density than advising them on running a successful race.

The final round would, of course be the election. As is the case on “The Voice,” competitors are members of a judge’s team. In this case, the political mentors, such as the conservative woman on CNN who won’t give her first name or Geraldo Rivera’s pedicurist act as the team leaders and advocate for members of their team. Political parties are passe’. C’mon..what’s the difference between a Democrat and Republican? Answer: A few ounces of lithium.

The national vote, accomplished by 1 800 numbers and the number of retweets of a candidate’s catchphrase and Facebook friends, is over and done, everyone hugs, and, like every winner so far of “The Voice,” the winner is never heard from again and there’s peace in the land. Could work.

Political handicappers and other hacks are predicting the 2016 Presidential election will come down to Clinton vs. Bush. This gives rise to the possibility a second Clinton and third Bush in the White House and the first time an ex-President’s spouse will have become the nation’s Chief Executive.
Let’s take those scenarios one at a time.
Third Bush in the White House. Would be proof the voters have adopted a diet heavy in milquetoast and political jams. It would also be disturbing that the name the leader of the free world prefers to go by, Jeb, is an acronym for his actual name,

(John Ellis Bush) which could spark a rush of likewise naming newborn babies during his administration giving way to a generation of kids named Inc., Ltd., and SNAFU. That’s a dealbreaker for me.
Ex-President’s spouse as current President. I have no obvious objection to this, but it does make me think of the former Los Angeles Rams NFL team.
Georgia Frontierre inherited ownership of the team when her husband died and moved it twice: first from the LA Coliseum to Anaheim. Not her fault. Her late husband made that deal. Then she moved the team all the way to St. Louis.
I would not be in favor of moving the United States of America to St. Louis and would ask journalists to make that an issue at every campaign stop.
One also wonders what an ex-President does when his or her spouse is busy doing their former job. A little bit of research reveals the most successful strategy is resisting the urge to insert the phrase “well, I’ll tell you what I would have done,” when asked for an opinion about the current officeholder’s latest move. Not that the Clintons sleep together anyway, but this would cause connubial cloture.
None of this, however, has a single thing to do with Clinton’s qualifications to be POTUS, even if she does have to block out time on her calendar to throw hard objects at the First Bubba.
A President Acronym Bush, however, would have no such distractions since his family has shown its members are quite adept at holding high office while perfecting the art of the benign. Finish off Sadaam during Gulfwar 1? Naah..great set up for a Gulfwar 2. Do the right thing for victims of Hurricane Katrina? Naaah…let Brownie mishandle it.
There’s a long way to go before this thing is decided but it’s clear at this moment a tough political battle will ensue and you know, if the second time is the charm for Hillary Clinton it won’t be because she emailed it in.