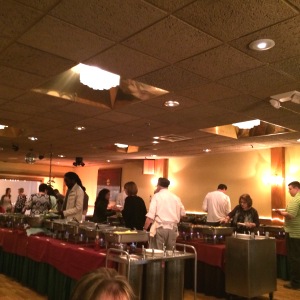 I didn’t grow up with Easter. It would be a funny thing for a Jewish family from Queens, or anywhere else, to be involved with. By the time Easter hit we were usually into our third or fourth day of Passover matzoh-induced digestive distress. We didn’t hunt for eggs. We hunted for exLax.

But Easter came into my life in 1973 when I married an Episcopalian girl from suburban Rochester, N.Y. Greece, to be specific.

We never really did much about Easter until the past five or six years when my sister and mother-in-law started inviting to Greece to join them for Easter dinner at a famous buffet and “party house” called Golden Ponds. The name seems to be derived from the fact it’s located on Long Pond Road and a tip of the chafing dish to the Henry, Jane Fonda/Katherine Hepburn film “On Golden Pond.” Cute. 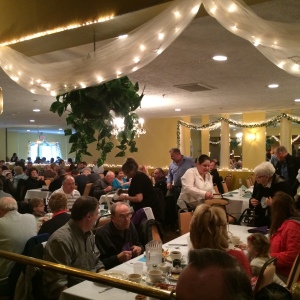 It’s difficult to see the place from the road but it’s not hard to know when to turn in. Just follow the constant parade of minivans and long family sedans stuffed with famished Easter celebrants who can’t wait to jump out of still-moving vehicles in order to claim their seats at tables long-reserved for the big day.

Once inside and seated the battle for the best dishes ensues. The offerings are typical brunch fare—breakfast and lunch dishes and tall, refreshing mimosas.

There are, however, scenes of fierce conflict. Most notably, the tray of French toast could easily be confused with a gastronomic Gettysburg. As combatants line up on either side of the sought-after thick wedges of the egg-dipped delight the bravest thrust their arms forward in order to take possession of the all-powerful tongs. Without them, acquisition is impossible. There are only two sets, a woefully inadequate supply for the impatient line of diners desiring as many wedges as they can plop on their plates. Take took long, or too much, and a dowager from Irondequoit might bark, “hurry the hell up!” at you or a portly pansy ass from Penfield might simply attempt to wrench the appliance from your hands. It doesn’t take long before it’s all-out war and the momentary allotment of the breakfast food is depleted scattering the battalions at the buffet line over to their second choice, the bacon tray, while growling, “there’s no freakin’ French toast left!” I was lucky enough to score two wedges on my first trip, but left bereft of seconds on my subsequent sorties.

Personally, I was mature, and full, enough not to be bothered by this setback as I succeeded in filling several plates with pancakes, bacon, sausage, hash browns and a few desserts to which I refuse to admit.

Indeed, I emerged from Golden Ponds fuller, fatter and happier but I’m already plotting next year’s assault on the French toast tray. Hint. It involves the addition of sharp objects, a Taser and eating the last wedge in front of the Penfield pansy ass.