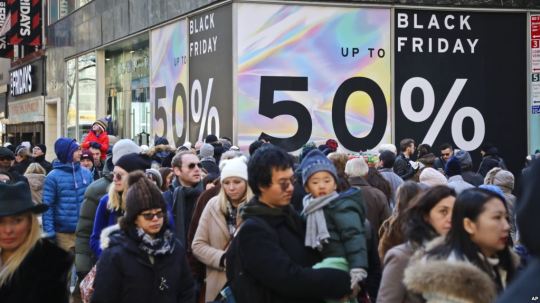 I love Black Friday. I never buy anything, but I never come home from the stores empty-handed. Or should I say empty-headed, because my noggin’ is chock full of scenes squirreled away as I plow through the crowds of consumers who may as well be wearing camo and greasepaint as if they were hunting for buck Up North.

Let me start with the big, big guy imparting his wisdom to the little, little lady about the early lull before the deluge. “It’s like this,” he said in his best philosopher’s/bullshitter’s voice. “The folks are either regurgitating or recovering (from Thanksgiving).” Too polite to call the lummox on his profound nonsense but not dumb enough to adopt it, she replied, “Must be. Or else they just haven’t yet arrived. It’s still early.” The big guy didn’t realized he’d been owned and mustered a lusty “See?”

It was Def-con 1 at the local Walmart, hours before the official start of Black Friday. The troops scurried to set up crime scene tape from the front clear to the back of the store, delineating the expected lengthy checkout queues. Men and women ran around like SWAT team members, armed with two-way radios, clipboards and earnest faces, ready to intervene during the inevitable wrestling match between customers fighting over the last 99,000-inch TV on sale for $1.50. 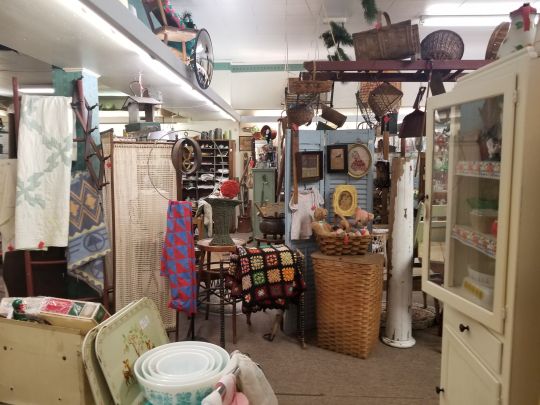 I’ll move on to an antique mall in Jackson, Michigan. That’s about 90 minutes west of Detroit off I-94. Somehow we ended up out there because it was a sunny day and it seemed better to take a drive then look for parking spaces at the mall. Now for those unfamiliar with Jackson, it’s main “industry” is home to a group of state prisons. I always thought a catchy little slogan for the town would be, “Making a Living Off Lifers.” Just never caught on. Anyway, we hit two antique malls. At the first, a sprawling one-story affair, a guy kept wandering into every booth we were in. He seemed legit except for him constantly telling us, “I got one of those.” It hurried our pace. We did find a few bargains if you count some old doilies and other stuff made of fabric my wife uses for crafting. There was a pot of free coffee, but it looked like an antique too. I mean..is coffee supposed to be solid?

About a mile away the second place was much bigger. Three floors of old stuff including a can of Liquid Wrench, which looked like the one I still have in my garage. The featured “guest” in this episode was the barrel-chested gray-haired guy wearing a University of Arizona jacket, pushing a stroller that would accommodate two toddlers. Psych! As he pushed the buggy through the tiny aisles I could hear women screeching little baby-waby-cutey-tooty  things in voices of such high frequency it would compromise the integrity of bullet-proof glass. Those must be cute babies, I thought. So I waited until the guy made his way towards where we were standing and man, those babies were brothers from another mother…a mother with four legs! They were twin tea cup shitzus! Yeah, they were cute as hell and the guy was cool. We got talking to him because my wife and I are both University of Arizona alumni, which made him instantly cool. Had a nice conversation, gave each other the obligatory “Bear Down!” and moved along. As we thought about it, we figured the guy didn’t really want any antiques. He was one of those folks who wheels around their adorable pets to elicit squeals from others sane people.

I’ll wrap this up with today’s early morning trip to the mall. Wasn’t in the market for anything. It’s just a lousy, rainy day and it’s a place to walk and absorb. The big crowds hadn’t yet arrived, as most of the stores still were not open. What caught me attention was the kid getting the Cinnabon stand ready. The lights were out, but he was near the window so I could see what appeared to be a desperate young person apparently freebasing frosting, perhaps to get that kickstart for what would be a challenging day.

At that point it was time to escape. A nice line of cars followed me to my parking space which I was more than happy to relinquish. I have to admit though. I was a bit surprised at the initial lack of shoppers in the mall. Maybe they were just regurgitating, or recovering.